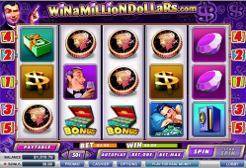 Anyone who has ever played an online slots game has fantasized about winning “the big one”, a prize of one million dollars. With Waher Gaming Technology’s (former Vegas Technology) Win a Million Slots, your dreams of riches could very well come true. Win a Million has a bonus round that actually pays out a top cash prize of one million dollars. With more than 30 winning combinations, this is the slot to concentrate on if you are serious about winning big bucks.

Win a Million Slots is a five reel, 5-payline slot game with a theme of the lifestyle of the rich- in other words, Money. The reel symbols reflect the game’s theme quite well. Anyone who sees a game that has reel symbols like Stacks of Money, a Diamond, a Briefcase stuffed full of money, a Wealthy Man, Dollar Signs, various Jewels, Coins, a Bank vault, the world Globe (representing rich jet-setters who travel all over) will know that this game is serious about money and the lifestyle that goes with it.

The Wild and Scatter Symbols

The Wild symbol for Win a Million Slots is the Wealthy Man. Like all Wild symbols, this one will help layers to make winning combinations on the reels. The Scatter symbol for the game is the Globe. If a player has wagered $5.00 on all five lines of the game and this symbol comes up all the way across the reels, then that player will be the recipient of a million dollar prize. Even if a player makes a bet that is less than the maximum amount, they can still expect to receive some really awesome prizes.

Win a Million Slots can be truly life changing, especially when you study the pay table. The Million Dollar Bonus game is also a wonderful way to win a serious amount of cash. In order to activate the Bonus game, players will need to get three of the money-stuffed Briefcase symbols on any of the paylines. One the Bonus game starts up and you see five big bags of money on the screen, you are the million-dollar winner. Be advised that you won’t get the entire million all at once. You’ll receive a quarter of a million dollars right away, and the rest will be given to you $50,000 per year for the next fifteen years. Are you ready to be a millionaire? Play Win a Million Slots regularly, and you just may be the next big winner!