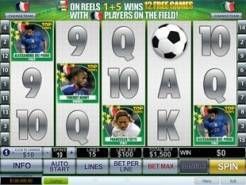 Play Now
The second in the series of Top Trump cards this soccer themed game was designed specifically around the World Cup. The game features real life players, world famous for their skills on the field. The imagery is realistic and the sounds effects are outstanding.

Choose the teams for the first game

Each spin gives you 15 chances at hitting a win so ensure all 15 lines remain active. You can bet 10 coins per line with coin values ranging from just 1c up to $5. The lowest bet across all lines is just 15c a spin while high rollers can play as high as $750. For low rollers keeping the bets low keeps you at the reels for longer increasing your chances at playing the free rounds. The game features 6 teams and popular players from each. Before you start choose two teams and three players from each country to see your favorite players in action. You can change your teams any time during play.

Whose game for another round?

The wild symbol says just that and plays the position of any player on the field. Five on the same payline will pay top prize of 10,000 coins and depending on the bet settings can mean $500,000. The scatter symbol is the Top Trumps logo and pays out a multiplication of your bet based on how many are gathered together, 5 pays out 125 times your wager. The bonus symbol is the ball which can only be found on reels two and four. When it appears at the same time as a player on its immediate left or right you are given a chance to play Pass The Ball. The flag symbols are important since getting two of the same flags on the first and fifth reels will roll out 12 free spins.

The teams play on their own side of the reels and when the ball appears with one of the team members on the first or last reel at the same time, the ball is passed to that player who then kicks the ball to other members of his team. Each time the ball is passed you are paid out three times your bet. You can gamble every win, all or just half. The aim is to choose a card of higher value than the dealer.

Pit your favorite players against each other to see who comes out tops. Keep changing them to add to the excitement of the tournament. Download this incredible software to start playing this highly interactive game for football fans the world over. Golden Palace Casino , Casino Swiss , Casino Europa are the best places to play Top Trumps World Football Stars Slots
Play Now