Avalon vs Avalon II from Microgaming 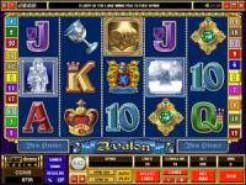 Play Now
Sequels to popular slots are always worth a look, particularly if you loved the original game. Microgaming is far from new to the world of slot games, so it stands to reason they would have one or two sequels to look at. Avalon was a popular release when it first came out, and that naturally led to the sequel – appropriately called Avalon II. Both focus on the same theme, namely that harking back to the times of King Arthur. And both have plenty of enjoyment included. But which one is best?

You’d expect this to be more basic than the sequel. Avalon has a 2D appearance, and lots of those frustrating playing card icons you’ll see in lots of other slots. But it does have that famous sword appearing on the scatter, and this can win you 12 free spins with a multiplier worth up to 7x. The game also includes a treasure chest wild in the free spins feature, and the Avalon symbol as a regular wild. It also boasts 20 paylines over five reels.

It wouldn’t be going too far to call this the souped-up version of the original game. The graphics have been given a major makeover, and you also get lots of exciting features. Watch out for the Lake of Legend, Misty Vale, Dusky Moor, Hall of Shadows, and the Isle of Avalon. Well, we did say they packed a lot in! Surprisingly, those playing card symbols are still present, but at least the others have had a makeover. You also get 243 ways to win here instead of paylines, not to mention lots of coin values to choose from. You can also bet more than one per go. With up to 480,000 coins to be won, we think most players will like a shot at that, not to mention the eight bonus games that can potentially be played.

Our verdict: Which game is best?

We doubt it will come as a major surprise to learn our verdict sits with the sequel, Avalon II. This simply has way more to it than the original, with lots of potential bonuses and extra features to look out for. Play both to see if you agree with us, but we think it will be the sequel you will keep on going back to when you check out the Avalon II game from Microgaming.
Play Now