One Million Reels BC Slots 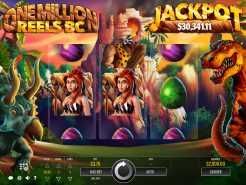 Play Now
At a glance, One Million Reels is a slot machine game with 3 reels and 6 paylines. It has a wild progressive jackpot feature with maximum coin use of 15. It also offers a free practice mode. This one of a kind game was created by Rival and was released on January 12, 2009. A Jurassic Park theme is adopted for One Million Reels. The film Jurassic Park was an epic movie released in 1993 about the prehistoric animals that once roamed the Earth. This spectacular and famous movie was directed by Steven Spielberg starring Laura Dern and Jeff Goldblum. Incorporating this theme to the game will bring out a kind of anticipation that people had when watching the movie. The theme of the slot machine game and its total appearance are remarkable with its attractive lay-out and splendid lights design and graphics. To follow the theme, the game utilizes symbols which most people are already familiar with from the movie such as dinosaur eggs of different variety, a prehistoric cave man and woman and the famous beastly Tyrannosaurus Rex. Also, on the background of the game are more Jurassic characters which are animated in design. There other things that goes along with it like swamps, prehistoric plants as the fern, volcano and strange-sounding insects. All of these truly add more zest to the game. The game has a significant T-Rex icon which is the wild symbol. This appears on a payline which is enabled to complete a given combination. The T-Rex wild icon will alternate with the other symbols while forming winning combinations but not the scatter icon.

One Million Reels BC Slot Games

On the aspect of how the game operates, a winning payline which includes 1 wild icon will pay 2x the payout indicated on the pay table. On the other hand, 2 wild icons in the payout will generate 4x the payout indicated on the pay table. A progressive jackpot is achieved when maximum coins are played and 3 jackpot symbols are hit on whichever payline. The jackpot amount is then calculated as soon as the win is generated. When a player hits the progressive jackpot, the amount of the jackpot will go back to a base amount for all gamers. The increase will begin after the resetting.

There are various Rival casinos where the One Million Reels BC Slots are available. You can visit the Golden Cherry Casino now.

Where to Play One Million Reels BC Slots