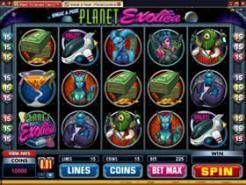 Play Now
In the constant race to win our attention, online casinos are always trying to come up with something new. Some themes have been worked to death, while others have just been touched upon, and science fiction themed games fall somewhere between those two extremes, but in the years that we have been playing sci-fi games, we have never seen one quite like this.

The Sneak-a-Peek: Planet Exotica game is set in the seedy edge of the galaxy. Don’t get me wrong – the graphics and overall execution is splendid, as we have come to expect from Microgaming products, but the setting is an interplanetary strip joint where green-hued alien girls take their clothes off for coinage in the bonus round. Think the cantina from Star Wars, but where the entertainment takes off their clothes.

Whether space strippers are your cup of tea or not, Sneak-a-Peek: Planet Exotica has a super finished and detailed design. And, stripper side game aside, the overall concept for the game and the detail in execution is truly breathtaking. We are looking forward to many more games that will benefit from the advances made in this fun science fiction adventure.

As we have come to expect from Microgaming, this one is totally intuitive in game play, and it works perfectly. There is not one, but two bonus games! The first one is the Select-a-Smooch, where the player wins free spins, and the second is the Sneak-a-Peek bonus game where cash money is won, as well as a sexy alien strip show.

This is a fun game with some sexy action on the side. The overall game-play is splendid and it should not be missed by novice slot players or the most hardened veterans. The sound design is unique to the game, and, like every other aspect, it lends to the environment that the game designers have created for players. So settle yourself into your favorite gaming station with your fizzy alien concoction of choice, and spin the reels on Sneak-a-Peek: Planet Exotica now!
Play Now

Where to Play Sneak a Peak Planet Exotica Slots