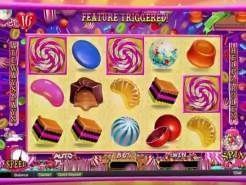 Play Now
The dream game for all players in possession of a sweet tooth, Sweet 16 dazzles with its overwhelmingly beautiful and colorful main screen while providing numerous chances for big earnings through its profitable symbols and highly rewarding bonus games. The background canvas surrounding the reels has a delicious purple shade covered with every type of candy imaginable – lollipops and chocolate with the notable exception of strawberries. Each of the main options is upon various objects connected with the game's theme. The Speed button is a scales, the AutoPlay one is on top of chocolate candy, and the Bet one rests between two gingerbread men. The Win indicator lies on candy canes and other colorful sugary delights, and the Spin option is underneath a jar full of sweets. There is a Sweet-o-Meter in the top right corner of the main screen that is part of one of the game's bonus features.

The gameplay revolves around five reels, three rows, and pay lines that pay in every direction. The available coin sizes range from 1 cent to 1 dollar. The Speed option has three levels, and every time a higher level is chosen, a bag full of sweets will be added to the scales. The majority of the symbols are sweets of various kinds. Apart from a paytable filled with well-paying mouth-watering symbols, players can also profit from a wild, a scatter, and a trio of bonus features that deliver free spins and multiplier prizes alike.

A Sweet Paytable with Excellent Payouts

The game's paytable has 14 symbols, and all of them feature three winning combinations that include between 3 and 5 matching symbols. The highest paying symbol is the candy covered with numerous little spheres, each bearing a unique color. It offers 30, 100, and 500 credits. The lips candy pays 20, 50, and 250 credits. The chocolate candy with the caramel leaking from it and the shiny spherical candy mostly covered in teal both bring 15, 30, and 125 credits. The candy with the white and red stripes and the other one with the blue and white stripes award 10, 25, and 100 credits. The cubical sweet with the orange, yellow, pink, and black coloring and the red spherical candy with the liquid filling grant 5, 20, and 80 credits. The symbols with the orange-shaped candy, the bean-shaped purple candy, and the bright green candy give 5, 15, and 75 credits. The purple sphere candy, the orange sweet, and the blue-pill like candy are the game's lowest-paying symbols and provide players with 3, 10, and 60 credits.

Taste the Prizes of the Highly Efficient Wild and Scatter Symbols

The wild of the game is the Sweet 16 logo symbol. The icon depicts a scarlet heart on a golden background with the game's title carved within the heart. It doesn't offer any winning combinations of its own. It has the grouped effect, meaning that the surrounding positions will also be covered by wilds whenever it appears on the reels. The Sweet 16 logo symbol can appear on the second, the third, the fourth, and the fifth reel. It can substitute the game's other symbols to create more winning combinations and earnings. The only symbol that can't be substituted is the scatter Lollipop. It has its winning combinations, and they are multipliers increasing the total bet. Three scatters increase the bet three times, four scatters multiply the bet ten times, and if 5 scatters land on the reels, the total bet will increase 500 times.

The game's main bonus feature gets activated when at least three scatters show up on the reel. Sixteen free spins will then be awarded, and during them, the special Morph Magic multipliers will be granted, and they can be as small as two times and as big as 20 times. If the right triggering combination appears on the reels, the feature will be restarted. The Morphing symbols feature will be active during the feature. It entails that all symbols that participate in a winning combination will transform into others, which, in turn, can create more winning combinations. The morphing will continue until no more combinations are created. The Morph Magic! Feature additionally increases prizes by awarding a multiplier for each consecutive win. The multiplier value will rise by 1 for every consecutive until it reaches 10. Enter Sweet 16's sugary world, enjoy its overwhelmingly colorful and joyful appearance, and profit from its generously paying symbols and unusually beneficial free spins and multiplier prizes.
Play Now

Where to Play Sweet 16 Slots