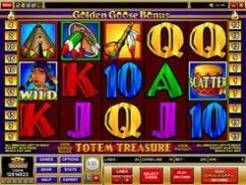 Play Now
Golden Goose has put a twist on the standard slot game, Totem Treasure. What really spices this slot game up is the four added Bonus games. It is a five reel and 20 pay line slots that accept up to 200 coins. You can also look forward to the wild/multiplier symbol and a scatter symbol. Coin values range from a penny to .20. Download and Play Golden Goose Slots - Totem Treasure today!

The Wild Squaw is the wild/multiplier symbol and doubles all winnings. It substitutes for any other symbol to create a winning combination however; it won’t substitute for the Scatter symbol. The Scatter Drum is the Scatter symbol and when you get three you will have created a win. The symbols in Golden Goose Totem Treasure slots are animated but the action will keep you on the edge of your seat filled with anticipation. The main symbols that will bring in the loot are the Native American woman and the Drum. Don’t underestimate the remaining symbols as they pay out nicely too.

To enter the Bonus Round, which activates at will, one of the four bonus games will get underway. If you enter the golden Egg bonus game you will win an egg from the Golden Goose with up to 2000 bonus coins inside. But, if you make it to the Golden Reels Bonus Game you will be up against five varied reels filled with 15 Golden Eggs. Double-click on one egg in each reel to disclose your winning bonus amounts which can be up to 5000 coins. The Money or the Egg is the third Bonus game where you are given the chance to choose the Money or the Egg. The final bonus game is the Pick a Card bonus where you pick a card to win anywhere from 2 to 11 free spins plus a multiplier up to six times.

Golden Goose Slots - Totem Treasure can be played at Microgaming casinos . They are a fully functioning online casinos that have a number of casino games, loyalty program, bonuses and secure banking. They offer unlimited play for fun or for real cash and they can be played via Flash or download. Credit and debit cards can be used by all players internationally.
Play Now