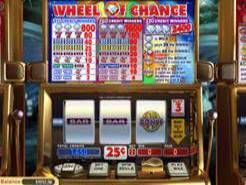 Play Now
Games such as these remind us being in the thick of Vegas or on the edge of our seats watching another exciting version of a TV game show. Now it is your turn. The wheel is incorporated into a very simple slot, winnings from the slot is but one element to the game while the game is another and can win you $60 instantly. Both games are simple but together they create some very interesting variations. Brought to you by Wager Gaming, the innovators of many things including the wild and wacky world of 7 reel slots , this game is sure to delight!

Take your chance on the Wheel of Chance

First you start out on the screen where a single lined three reel slots awaits. Just above it, superimposed over a rainbow colored wheel in the background, is the paytable. The paytable basically shows the wins for a single coin and that for a second coin the payouts double and for a third coin they are tripled. However in betting the third coin, there are other benefits besides the triple jackpot at stake. These benefits include your chance to play the wheel of chance which is initiated with the bonus wheel icon. If the wheel is what you are aiming for then without a doubt bet 3 coins. The next variable to consider is the coin size. This has very little effect except on the size of your bank roll. The bigger your bank roll, the bigger the stakes but also the bigger the wins. Players looking at smaller balances should consider starting off at 10c per coin and bet all three coins per spin. This is 30c per spin and can win a jackpot of $80, which is directly in proportion with betting $30, at a $10 coin size, per spin to win $24 000.

A diamond for every day of the week

Diamonds are not just a girl’s best friend, if you are playing this game it is yours too. Three diamonds will pay out the jackpot. The diamond is also the wild, offering wild winnings and wild multipliers. If the diamond completes a winning combination you are paid out double what would have been paid out and if there are two diamonds, the key to your payout is in that third symbol. This kind of win will pay out 4 times what 3 of the third symbol would have paid out according to the paytable. The next symbol is the bonus symbol with bonus printed on a backdrop of a mini wheel of chance. This symbol is only active with the third coin. Betting less than three coins in this game will keep the reels spinning instead of giving you a more than fair shot of the wheel of chance on the next screen. The remainder of the symbols are red sevens, a series of BAR symbols, singles, doubles and a triple BAR, and of course a snippet of fresh cherries.

Get spinning to get some winnings

With this being a three reel slot you just need one bonus icon to land in the middle of the payline to trigger off the bonus round. You will be spun into a second screen which is all consumed by a multi-colored wheel divided into slices. You will immediately notice that the tree narrower slices are where you want your wheel to land. The good news is that you do not just have one chance at it, but keep your head about you. Start the game by clicking the spin button and when the wheel stops your prize amount is added to the balance in the top right hand corner. With each spin the slice that you landed on will convert into a bust slice and landing on any bust slices will end the game for you. At any stage you can stop spinning and start collecting your wining earned in the bonus game. This will send you right back to the three familiar reels where you can spin for another shot at the wheel of chance.

This game has great stakes and with a decent dose of simplicity. Give it a spin and bring back memories of the good old days when winning was easy. It can still be! All you need is to download the software and get playing the game.
Play Now

Where to Play Wheel of Chance 3 Reel Slots