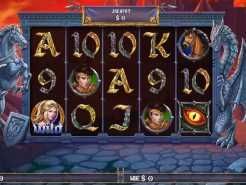 Play Now
Bovada Gaming’s Dragon Siege features an epic theme depicted with a stunning level of detail, a sense of scale, and an attractive fantasy atmosphere. Players can admire an imposing sight behind the reels that involves a demonic red sky riddled with high castle towers. By the reels are two stone statues on either side of the symbol positions. One is a mounted knight armed with a sword, and the other one is its opponent – a ferocious red-eyed dragon. Both figures are awe-inspiring to look at, works of art worthy of a veteran sculpture’s craftsmanship. The reels themselves are framed within the interior of a building with walls and columns of the same color as that of the stone enemies.

Reap the Rewards of the Epic Battle

Dragon Siege can deliver prizes with the help of 5 reels, three rows, and 20 pay lines. Coin sizes start at 0.01 credits and can go as high as 10 dollars. That makes the biggest possible bet of the game 200 dollars. Furthermore, players will be able to profit from a Jackpot prize, the value of which is depicted continuously right above the reels. The game’s paytable offers a vast collection of highly rewarding winning combination prizes and a free spins feature, which can deliver spins and massive multiplier boosts.

Some of the symbols that can appear on the reels, form combinations, and deliver payouts are the card letters and numbers, including the Ace, the King, the Queen, the Jack, the ten, and the 9. Other than those, players can benefit from the Dragon symbol, the Castle symbol, the Book, the Horse symbol, and the Dragon Eye one. The wild of the game is the breathtaking, gorgeous blonde heroine. Another character symbol is the young Hero.

The free spins bonus game of Dragon Siege begins when the Bridge symbol shows up on the first reel, and the Gate symbol appears on the fifth reel. When the feature starts, players will need to choose one of the characters and receive as many as 25 free spins. During the free spins, the Bridge and Gate symbols will act as wilds and will be able to substitute the other symbols in the game. The multiplier that will affect the eventual prizes of the free spins will increase with every Bridge and Gate symbol that makes an appearance on the reels. The multiplier of the free spins can reach ten times. Dragon Siege Slots is a beautiful addition to the best-of-list of any passionate player that prefers slots with an epic fantasy setting and doesn’t mind many free spins with substantial multiplier rewards.
Play Now

Where to Play Dragon Siege Slots