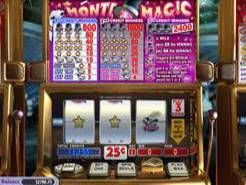 Play Now
Simplicity is the game and magic is the name. The circus has surely come to town and there are some magic tricks you have not seen yet. Be entranced, be amazed at how cash can come rolling out of nowhere and land right in your lap. Just what the doctor ordered, a bout if fun and laughter personally delivered by Vegas Tech software developers, Abracadabra! and $24,000 can be yours at the click of a button. Sitting in the middle of a grand casino lounge, the slot contains the reels at the bottom of the screen and the easy to understand paytable just above it.

The mastery of trickery and disguise

This is a typical classic slot with some extra features thrown in for some excitement. There is just one line but that single line can take up to three coins on it. To get the maximum out of the game, bet all three coins always. The value of the coin will determine your bet size and you can change this from 1c up to $10 in a betting range from 3c to $30. The paytable is key to understanding how the game is played. It is divided into three blocks. Each block outlines the pay outs for each coin that is bet. The first block relates to only one coin being bet while the last block is based on all three coins being played. Although only the top payout is shown in this block, you can easily work out the payouts by multiplying the payout on one coin by three. The more you bet the more you win, but not only that, you can qualify for the bonus round only if you play that third coin.

A hat, a rabbit and a rabbit in a hat

The magician’s hat, full of great surprises is probably the most important symbol in this game. It pays the top prize for all three on the single payline. It also acts as the wild, so it can substitute for any other symbol and you don’t miss out on a payout. It is also a multiplier and doubles the winnings on any given spin. Have two on the payline and as wild symbols, you are guaranteed a win, not to mention that the win will be paid out four times! So for example two top hats and a rabbit will complete the three rabbit winning combination. This would have paid out 240 coins, but since two top hats were involved 240 is multiplied by four giving you a total of $9,600! Pulling the rabbit out of the hat entitles you to a bonus round but, only if you are playing all three coins! You just need one and it only appears on the third reel. The magician’s wand is a very welcome symbol because it pays for even just one! Usually only the highest win per payline will be paid out, but not in this fantastic world of fantasy and mystery! Getting the wand and the rabbit perched in the upturned top hat pays out and triggers the bonus round.

The show must go on!

Welcome to the Monte Magic bonus game! Your rabbit in the hat is your trigger symbol and as long as you have all three coins on the reels you will be taken to center stage where 12 cards are laid out face down in front of you. Choose three of these 12 cards. Now that you have chosen your three, narrow it down to just one card. Clicking on this card will award you the random prize beneath it. Good luck!!

Join the Monte Circus and his top magician for some reel spoils and magical tricks that will surprise and amaze you. With just three symbols to line up hitting the jackpot is a realistic possibility! Download the software to conjure up some top wins.
Play Now

Where to Play Monte Magic Slots