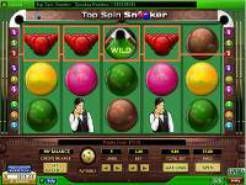 Play Now
Have you ever heard of the World Snooker Championship? Not everyone is clever enough to be put to the challenge of some Snooker! But…you can when you give Top Spin Snooker a try! This is a five reel and nine pay line video slot that has everything to do with Snooker. It accepts coins from 5¢ to $10.00, and the maximum number of coins that you can bet per spin is 9. In Snooker you can win up to 20 Free Spins, 36 winning combinations, a top jackpot of 8,888 coins, and a Master of Spin Bonus Game! What more could you want? Download and play Top Spin Snooker Slots today!

All you have to do is hit three or more Rack symbols on the reels and you will have won the Free Spins. To trigger the bonus round, you need to hit three or more World Snooker Championship symbols. Compete like the pros for the Grand Prize in Top Spin's Bonus Feature and be crowned the true Master of Spin. Win as many as 20 Free Spins when a minimum of three scattered Rack symbols appear anywhere on the five reels, this will activate the Free Spin Bonus Round and you win 5, 10 or 20 Free Games respectively.

The Pocket & the Rack