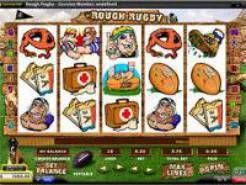 Play Now
Into Rugby? If Rugby is your thing then why not incorporate a little Rugby online video gaming into your day? Rough Rugby is a 5-reel, 15 pay-line video slot focused on rugby. Get ready for the Prize Kicker Bonus Feature game where there is some serious cash to be won! Play for as little as a nickel up to ten bucks per pay line. The Rough Rugby video slot machine game has a Wild symbol, Scatter symbol, Free Spins Bonus Round and a Prize Kicker Bonus Feature game. The highest payment in the regular Rough Rugby slot game is 20,000 coins respectively. Rough Rugby Slots offers some 37 winning combinations! Download and play Rough Rugby Slots now!

The Scrum Symbol is the Wild Symbol which means that the Scrum symbol substitutes for other symbols to complete winning combinations with the exception of the Scatter Symbol to trigger the Free Spins Bonus Round game. The Scrum wild symbol also does not substitute for the Prize Kicker symbol to activate the Prize Kicker Bonus Feature game. Alone, the Scrum pays nothing. Other symbols in this game include the Fullback, the Scrum Cap, the Right Wing, Left Wing, and Kick.

The Play-The-Ball symbol is the Scatter Symbol and it does not have to appear in a line on an enabled pay line to win as it can be scattered anywhere on the five reels as long as you have at least three. When three or more Play-The-Ball Scatter Symbols are scattered on the reels during a spin it activates the Free Spin Bonus Round games.

Where to Play Rough Rugby Slots