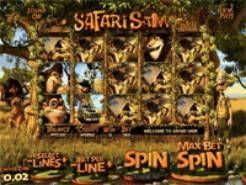 Play Now
This forthcoming weekend, Intertops Poker and Juicy Stakes Casino will be presenting their members with a superbly generous offer – a tournament, involving Betsoft’s state of the art slot games, which offers a prize pool of 1000 dollars. Everybody who joins this contest will get to acquire special tournament points by testing his or her luck on Stampede Slots and Safari Sam Slots, two of the most popular Betsoft games on the casino section of the sites. As it happens, both of the featured games share the same setting – the gorgeous wilderness of Africa.

When to Enter the Race for the 1000-Dollar Prize

Between April 27, Friday and April 29, Sunday, gamblers will get to acquire 1 tournament point for every spin, which is started with a bet of at least 10 cents on one of those two games. When Sunday night comes, the player, who has acquired the most points will be awarded the first-place cash prize, which is 300 dollars. Members should keep in mind that the amounts, which are won via Betsoft games have to go through at least a single rollover before they can be taken out of the player’s account.

Experience a Stampede of Great Bonuses

Stampede’s glorious visual design stands out through its excellent high definition graphics and therefore it can be best experienced on a big screen. The surroundings of the reels depict tall grass, the typically curved acacia trees and the vastness of the savannah, which is bathing in the hot sun. All across the landscape, massive elephant herds are moving. Stampede Slots offers 1024 ways to win, including the numerous winning combinations of the paytable’s symbols. The scatter of the game is capable of awarding as many as 20 free spins. The wild symbols during those free spins will be able to, at the best case’s scenario, triple the made earnings.

Go on a Profitable Ride in the Safari

Safari Sam’s 5 reels and 30 paylines are presented in a similarly breath-taking fashion, both appearance-wise and gameplay-wise. Stunning 3D animation, photo-realistic depiction of lightning and detailed graphics makes the experience of profiting from the game’s multiple bonus features even better. Gamblers will be able to enjoy constant free spins as well as an adventurous bonus feature, in which the player will be required to search and find animals. Randomly appearing wild symbols with huge multiplier prizes and the Double Up feature will also be at members’ disposal.

Signing up at Intertops Poker and Juicy Stakes Casino will lead players to much more than this exclusive tournament The two sites can also offer the best and most populated online poker rooms through the Horizon Poker Network as well as a huge collection of terrific games, developed by Betsoft, Worldmatch and Lucktap.
Play Now