Mystery of the Tarot Slots 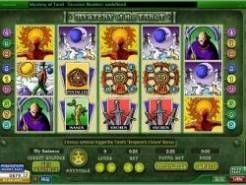 Play Now
Mystery of the Tarot Slots is a bonus feature slot that can read into the future about your chances at a huge win! Mystery of the Tarot offers five-reels and nine pay lines, accepting coin values starting at a nickel and up to ten bucks. You can stack the coins in nine deep so if you believe in the power of Tarot then you could wager as much as $90. This game has everything in regards to the bells and whistles…it has Wilds, Scatters, two supernatural Bonus Features …but it also has 32 winning combinations and a top jackpot of 10,000 coins. Take a Chance & Look into your Future Play Mystery of the Tarot Slots now!

What does your future hold?

The Wild Symbol in Mystery of the Tarot Slots is the Wheel of Fortune so it can substitute for other symbols to complete winning combinations with the exception of the Scatter symbol and it can not be used to activate either of the Bonus Games. The Scatter Symbol is the World but it doesn’t have to appear in a line on an enabled pay line, to win. Look carefully since the World will only show up on the first and fifth reels. But…when it does show up at the same time it will get you admission into the Cards of Destiny Bonus Feature. The standard symbols that are used in this game include the Fool, High Priestess, the Sun, the Moon, Cups, Pentacle, Swords, and Wands.

Mystery of the Tarot Slots offers players the Auto Play feature which can be extremely helpful during game play. All you have to do when you play this feature is sit back and relax…the machine does all of the work for you! Just so you know…the Auto Play feature does stop when you get Free Spins so you have nothing to lose.
Play Now

Where to Play Mystery of the Tarot Slots