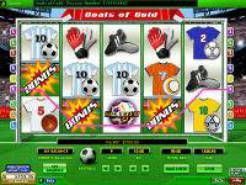 Play Now
Attention…all you soccer lovers…there is now an online slot game just for you! Goals of Gold slots offer five reels and nine pay lines in this enthralling video slot machine game. If you are good enough there is a soccer challenge at the end for the Grand Prize with your name on it. The Goals of Gold video slot machine game offers a Wild symbol, Scatter symbol, a Free Spin Bonus Round and a Cash Cup Bonus Feature game. You can win up to 15,000 coins and you can play as generously as you would like with coin values ranging from just a nickel up to ten bucks per spin.

Symbols that Lead to the Big Cash

The Soccer Team symbol is the Wild Symbol. This means that the Soccer Team symbol substitutes for other symbols to complete winning combinations with the exception of the Scatter symbol or to activate the Free Spin Bonus Round games. It also does not substitute for the Goalkeeper Bonus symbol to activate the Cash Cup Bonus Feature game. The Soccer Ball symbol is the Scatter Symbol but you do not have to have it on an enabled pay line, to win. As long as you have at least three Scatters it doesn’t matter where they land on the reels. If a minimum of three Soccer Ball Scatter Symbols are scattered on the reels during a spin it triggers the Free Spin Bonus Round game. The standard symbols used in this game are the Soccer Ball Trophy, the Stadium, the Soccer Cleats, the Goalkeeper Gloves, the Penalty Cards, Soccer Jersey Five, Ten, two and seven, and the Yellow Soccer Jersey 10.

The Bonus Symbol is the Goalkeeper so what you want is a minimum of three anywhere on an active pay line and this will activate the Cash Cup Bonus Feature game. In the Cash Cup Bonus Feature game, you will compete against the Goalkeeper to kick the Soccer Ball into the goal net. Scoring in all five rounds will award you the "Cash Cup" grand prize.
Play Now
Goals of Gold Slots News
Where to Play Goals of Gold Slots