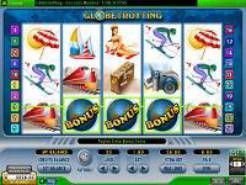 There is Great Power in the Eiffel Tower

The standard symbols used in this game are the Airplane, a Camera, a Suitcase, a Train, a Beach Umbrella, Sunbathing, Skiing, and Sailing. The Eiffel Tower is the Wild Symbol. This means that the Eiffel Tower symbol substitutes for all other symbols to complete winning combinations except for the Scatter symbol or to activate the Frequent Flyer Bonus Feature game. It also does not substitute for the Globe Bonus symbol to trigger the Globetrotting Jet Set Bonus Feature game.

Look at Reels One & Five

Globe Trotting Slots offers players the Auto Play feature which can be extremely helpful during game play. All you have to do when you play this feature is sit back and relax…the machine does all of the work for you! Just so you know…the Auto Play feature does stop when you get Free Spins so you have nothing to lose.
Play Now

Where to Play Globe Trotting Slots