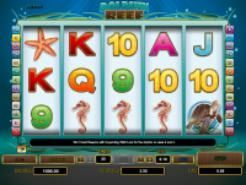 Play Now
Many of the newer casinos are embracing what they call new generation video slot games. Dolphin Reef is one of those games, which offers five reels and 20 pay lines. It offers very attractive Scatter Multipliers, a Wild Multiplier, and generous Free Spin rounds. Although it does not offer a progressive jackpot and no Bonus Round on the second screen the other pay offs make that virtually unnoticeable.

What will it Cost Me?

You can play Dolphin Reef slots with coin values that range from $0.01 to a mid-sized $5 per coin. You can play up to 10 coins per active pay-line, which makes the maximum possible bet an impressive $1000.

Ways to Win the Big Money

Eleven standard symbols make up this game and include things like the anemone fish, tortoise, starfish, the dolphin, seahorse, and Ace, King, Queen, Jack, Ten and Nine. The scene takes place near the ocean floor. Untraditionally, the Wild symbol is not the main factor in winning the jackpot but rather you want the Anemone Fish Symbols…five of them to be exact…for the 500 coin jackpot.

The Dolphin symbol is the Wild and Substitute Symbol in this game but it is not the Multiplier. Usually this symbol would substitute for other symbols to form a winning combination, but instead it serves as a trigger for the free spins feature in Dolphin Reef slots. The wild symbol in this game substitutes only for the scatter symbol, which adds a whole new dimension to the game. The scatter symbol in Dolphin Reef is the Treasure Chest symbol which can appear anywhere scattered on the reels. Get it a minimum of two times and the Scatter winning combination is complete. How much you will with the Scatter payout is determined by your original wager multiplied by the scatter payout. For example…five Scatters pays 2,000 coins when you have the max bet placed. You can figure it out by making sure that you have bet the max and five Scatter symbols…then just simply multiply the initial bet by 100.

Dolphin Reef offers a Free Spin feature which is activated by the Wild Dolphin Symbol. When the Dolphin shows up on the second or the fourth reel you get five Free Spins! This also initiates the Free Spin Round…this is where you can win very big!
Play Now