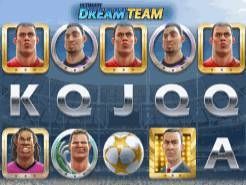 Play Now
Ultimate Dream Team Slots is the dream soccer-themed game for all fans of both gambling and the most popular sport in the world. The atmosphere on the main screen is beautifully crafted. The music is modest and energizing and the diverse atmospheric sounds of the cheering crowd never stop. The background imagery depicts a huge, World Cup-sized stadium and all of its seats are taken. The game’s title keeps producing a metallic shine. The gameplay involves 5 reels, 3 rows and 25 paylines. The bet can be as small as 25 pennies and as large as 250 dollars. Players can further profit from a well-paying paytable that includes a wild and a scatter, a couple of bonus symbol, which can activate two hugely satisfying bonus games.

A Paytable Full of Profitable Stars

Most of the paytable’s symbols are the faces of footballers, which share a striking resemblance with real-life players. The game’s wild is the ball, which offers 20, 150, 400 and 800 credits. The player who wears a white jersey and is depicted from top to bottom, brings the exact same payouts. The rest of the symbols have 3 winning combinations that include between 3 and 5 symbols. The footballer in the red jersey awards 75, 150 and 400 credits. The black player with the long dreadlocks in the purple jersey grants 50, 100 and 300 credits. The guy with the stylized hair-do and the pink jersey gives 25, 75 and 200 credits. The footballer in the light-blue jersey provides gamblers with 10, 50 and 100 credits and so does the goalkeeper. The Ace delivers 5, 25 and 50 credits, the King – 2, 10 and 35 credits and the Queen and the Jack - 2, 10 and 30 credits,

The ball replaces most of the rest of the symbols in the game in order to create winning combinations. The symbols that can’t be substituted are the Shirt and the Manager bonus symbols. When 3 Shirt symbols make an appearance the Reveal a Star Free Spins Feature will be started. 5 free spins will be granted. If more than one Shirt symbol shows up during the spins, an additional symbol for every Shirt on the reels will be revealed. The Dream Team Feature will be started when 3 Managers appear. A team sheet with 12 unfilled positions will be shown. Every position stands for a prize. 12 unmarked shirts are also depicted. When a shirt is picked, a player is revealed, a position is filled and a prize is awarded. When the selection is made, a yellow card or a boost may be unveiled. One yellow card awards the prize and two yellow cards end the feature. The boost will increase all the prizes attached to the unselected positions. One of the positions will be the Star Man’s one. When that position is filled, the prizes will be multiplied by 3. If all the positions are filled, the so-called Ultimate Dream Team Bonus win is delivered and it is equal to 30 times the bet. Ultimate Dream Team Slots is a great gambling game, which successfully elicits the infectious atmosphere of an all-stars football match, while satisfying the player with excellent payouts from its symbols, paytable and bonus features.
Play Now