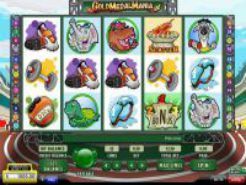 The Silver Medal symbol is the Wild Substitute Symbol. This means that it substitutes for other symbols to complete winning combinations with the exception of the Scatter symbol and it will not be used to activate the Gold Medal Mania Bonus Feature game. The Silver Medal symbol does not pay any wins by itself. The standard symbols used in this game include such people and things as the Goggles, the Stopwatch, the Dumbbells, the Track Shoes, Cluck Kent, Tiny Gray, Sally Light, Jerry Spring, and Will Powers.

The Medal Podium symbols only come into sight on reels two, three, and four but when they do they activate the Gold Medal Mania Bonus Feature game. Every athlete offers an innovative Bonus Round game. During the Gold Medal Mania Bonus Feature game, you decide on one of five different athletes to begin playing. Choosing an athlete multiplies your Bonus Round game winnings. You must provide three matching symbols with the same value. If you succeed, you win the amount equal to the value of the symbols. Play Gold Medal Mania Slots at InterCasino and 888 Casino .
Play Now